There is autumn in the air and summer is coming to an halt here in Copenhagen.
And what a summer! Besides the beautiful weather, this summer was one of the greatest. Again this year I got to attend Summer Session, a week long gathering of professional Danish jazz musicians under the guidance of some of the greatest players in the world. I was in Jamaaladeen Tacuma’s group, playing free and funky jazz – having a great time. In the afternoons the instructors rotated and I got to meet and play with them all. One meeting in particular was very special to me. Playing with Brian Blade for an afternoon was one of the greatest musical experiences I’ve had.  He’s the nicest guy in the world, which I’m sure is an important reason why he makes the music and everybody he plays with sound so great. When we shook hands after playing he said “you give me good vibes”. Being a human who also happens to play the vibraphone, that’s a wonderfull compliment:0) But the truth is, it all came from him. I was so inspired and smitten by his open, caring, humble and generous nature that I could only feel love. For the music and for everybody in the room. Thank you mr Blade.
Another great musical experience was our concerts at Copenhagen Jazz Festival. For some time we’ve had Mathias Heise on harmonica with us, but this year, guitarist Neff Irizarry also joined the group. Neff’s guitar playing took us all to new nights and both evenings ended with a standing applause and a sense that something truly great had happened. Afterwards I asked Neff to join us on our upcoming album and he added some wonderful guitar tracks to the album, making it sound even more complete.
Theese days I’m mixing and mastering our new album, which will be named “Out of the White”. If you join my mailing list, I will make sure to let you know when it’s out. I can’t wait.
Good vibes to you all. 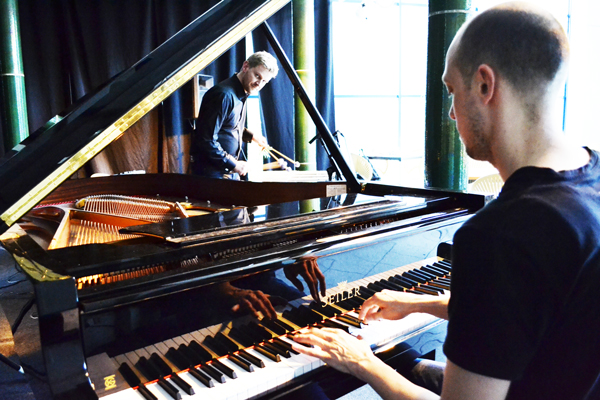 The Legend of Pipe & Sweater Next